We suspect that the farm was "sacrificed" in a royal Gavelkind and divided into two parts of approximately the same dimensions. The two parts of the farm, the upper and lower, were therefore rented separately for decades. In 1926 Franz Telser bought one half of the Gemassen farm together with his family, and about 30 years later he bought the second half.

At the end of the sixties, a new barn with barn and holiday apartments was built. Since then, the activity of agritourism has begun. In 1986 Wolfgang took over the parents' farm with his wife Rita. In 1996 the entire property, which corresponds to a length of 1,800 metres, was surrounded by a typical wood fence of the Venosta Valley. Wolfgang himself cut the necessary wood.

The most important project, the construction of a new residential building, was considered in 2003 and completed two years later. In 2008 we decided to renovate and convert the apartments. We have reduced from four to three apartments to create more space in each apartment.
In 2016 we started building the chapel. Wolfgang has always wanted to build a chapel on the farm.

Stefan and Veronika have been running the Gemassenhof since April 2017. Our first construction project since we took over the company has been the renovation of the bathrooms in the holiday apartments. In January 2018 we started with the work and in May of this year, the first guests have already been able to spend their holidays at our farm. 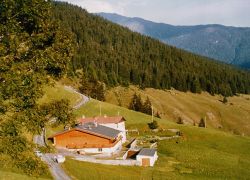 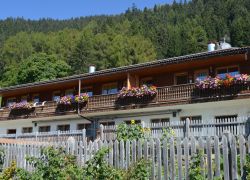